Whoosh, I am tired of JS all day long, let me try out something else. And yeah, I ended up here. Actually I was kinda playing around with Haskell before I reached here. It feels pretty good to have a change from the usual stuff. To be frank I think everyone should try out functional programming at some point of time. Well, enough bullshit let us get to building it. 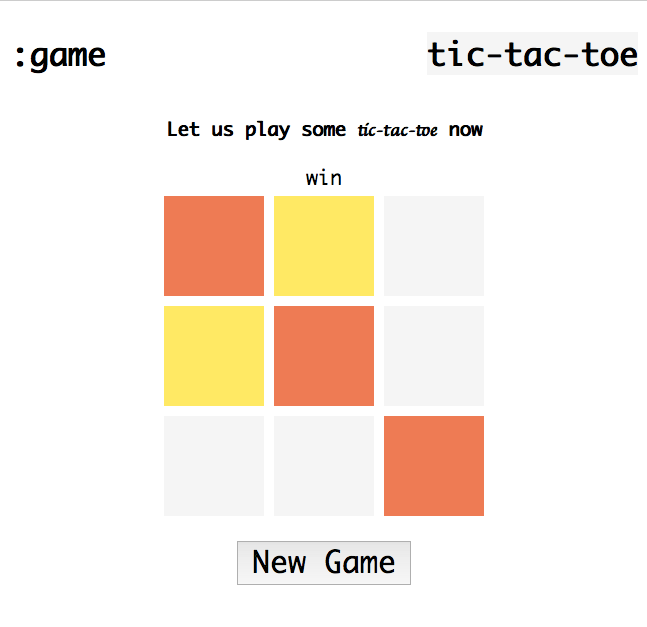 To start with Clojrescript is a functional programming language. It derives from Clojure.

I want to add the setup instructions, but it is different for different systems and I am really lazy right now so go check out the webpage.

Just some pointers, you will need Java first. Then install Clojurescript and then leiningen.

Btw in mac it is:

It is kinda like npm init command but with livereload and react installed.

OK, what that does is create a new project with figwheel and using reagent

Now you start the lien server ( which has hot reload ) by using the command:

The main file you will have to work on here is src/ttt/core.cljs. It is the file that we will add all the core logic into.

Well, let us see some basics of Clojrescript #

In the core.cljs file you will have:

Let us see what all of these lines do.

Well we have println instead of console.log. But since this is a functional language we use it like:

This will get printed in the JS console in your browser.

You can use ; to start a comment. Anything after this, used on start of a line or anywhere in the line is considered as a comment.

In line 10, what you see is a variable ( atom ) declaration. The difference between this variable and others is that it is an immutable variable which means you cannot modify it in place.

Renders component, duh. It renders the hello-world component on to the div with id app.

Well hello-world is a function that is return a html string kinda thing or more like return a JSX object ( if that is a thing ). In Clojurescript world it is called hiccup like syntax. It has pretty much redid the html in a Clojure ish syntax.

This is how you get a value from the immutable variable.

You use @ when using an atom

Check out ClojureScript Cheatsheet in case you get stuck.

Cool, now with all that basics out of the way let us get to building the actual game.

I will be using the code from here (tictactoe-clojurescript-reagent)

So as I said the main file you will be checking out will be src/ttt/core.cljs. We will go line by line ( mostly ) from the above cited project's core.cljs file.

In here we define a function which will, on call return a [n x n] matrix. (repeat n 0) creates a list of n 0's. We turn that into a vector. Now we get one n dimensional array. We create multiple copies of this to create an [n x n] matrix.

In here we are mainly defining variables. In line 12 we define the variable board-size. In lines 13 to 17 we are creating an atom ( an immutable variable ) which contains a text, the current board and win state.

Here we define the checks to see if the player or bot has won. Draw conditions are checked in another function. The variables user and computer are values that are passed from the function check-state defined at line 32. The contents of these variables are list of [i j] values for which the respective players have marked.

Once we have found out if there is a win or lose condition we use swap! and assoc to change the value of win inside of app-state.

This function check-state along with the above one is used to determine the win, lose, draw or none setting of the :win setting. This variable :win is what is then used in order to set the message on the screen.

If no elements are present in the remaining variable we set the condition as draw. Win lose conditions are checked in the check-win function which is called later on.

This is the UI definition of the game. The function block gives a hiccup like object of a single block. The function blank cross and circle are just simple wrappers around block to give different color blocks.

We use colors instead of symbols just because they are easy.

The render-board function is used to render the whole board using the board value in app-state atom. The definition is mostly the hiccup like syntax and I hope that makes sense to you. Towards the end we also add a button to reset the game which has an on-click lister added to it which changes the value of board into a new one and reset the win value to none.

And that basically wraps up the whole code. :)